Lisbon club Benfica and Olympique de Marseille have reached an agreement for the transfer of Konstantinos Mitroglou, who has today signed for Marseille after successfully passing his medical. 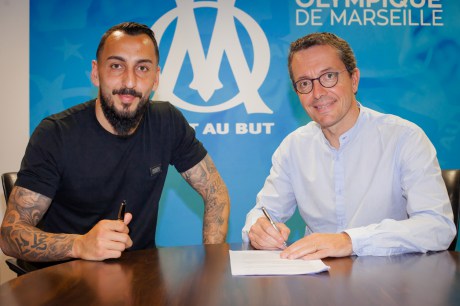 Born in Kavala (Greece) in 1988, Konstantinos Mitroglou grew up in Germany, where as a child he first began playing football.
As a youth player, he spent time first at Duisburg then at Mönchengladbach, where he completed his training before returning to his native country to break into first team football with popular club Olympiakos, with whom he won three Superleague titles (2009, 2013 and 2015) and two Greek Cups (2013 and 2015).
This powerful striker, skillful in front of goal and frighteningly effective, left the Piraeus club for Portugal in 2015, where he has been part of the Benfica back-to-back title winning team since 2015/16.
In two seasons with Carlos Mozer’s former club, “Mitrogooolos” – as he is nicknamed in Portugal – played 60 matches in the Liga NOS (the top-flight of the Portuguese football league), scoring a total of 35 goals. Over the course of his career, the Benficista has also played 43 Champions League matches with Olympiakos and Benfica.
A Greek international since 2009 (54 caps and 13 goals), Konstantinos Mitroglou, considered one of the top European strikers in 2017, notably played in both Euro 2012 and the 2014 World Cup in Brazil.
In signing for Olympique de Marseille, the Greek striker, the seventh new recruit of the summer transfer window, is taking on a new challenge in his career.